Holly, at Wood Glen Hall, called me yesterday Friday and asked me to come in on this Saturday to play for the residents. I gladly accepted, even though I knew I was not going to be playing any new pieces. During performances like this I rely on my usual pieces that I learned as a teen. These pieces include the first movement of Beethoven's Moonlight Sonata, Fur Elise, Chopin's Raindrop Prelude, Chopin's Prelude 4 and 20, and Beethoven's Op. 49 No. 2 Sonata in G. The latter is the 2nd in his series he called his "Easy Sonatas," which always makse the seniors turn their head. They like Op. 49 No. 2 because it is quick and has it's fair share of cute tricks. I concluded my performance with Rachmaninoff's Prelude in C# minor.

One thing that that I had to deal with during the performance, is that I had some stress from an interaction with an unpleasant stranger beforehand. It is during times like these that I have to realize my limitations as a performer, and know that I cannot push myself when I am otherwise distracted. That is another reason I err on the side of caution, playing comfortable pieces rather than performing something like Beethoven's Pathetique. I also do something similar when I go to new retirement homes, or when I play for large crowds. I would rather have a great performance and play comfortable pieces than make mistakes by taking too many chances. I know I am supposed to push myself, but I am also supposed to put on a good show. If I am not ready to perform a piece , I am not going to stutter and struggle through it. Doing so seems unprofessional to me.

All in all, today's performance was pleasant, even though I only entertained a handful of seniors. We all had a relaxing afternoon.

I got a call today from Julie at the Buena Vista Care Center, asking me to come in and play at 2pm later on. I gladly accepted, and made my way to Buena Vista. I did not feel too much pressure because the residents are welcoming even though we are all new to each other. Their piano room has a lot of light, and they leave the large side doors open so everyone outside of the room can hear me play.

I remember the first time I went there, and I thought their pseudo clavichord was the instrument they wanted me to play on. I made plans in my head how I would make arrangements of the pieces I knew, until one of the residents started talking to me and said, "Are you going to play the piano over there?" while motioning to the other side of the room where the console piano was. I felt a little silly after that, but played well during the next hour.

I was at Buena Vista for a forty five minutes today, starting out with Un Sospiro and ending with "Aerith's Theme." I also played Liebestraum 3, which turned out well since I have been practicing it daily. In addition to Liebstraum 3 I have been practicing Brahm's Rhapsody 2, but am not completely ready to start performing it again. Julie said she would love to have me back soon, so I am looking forward to that.

I played at Vista del Monte and Alexander Gardens today. I always like it when I play at more than one home in a day, because I can hear myself improve with each performance. If I perform two days in a row I do not reap the same benefits as playing twice in one day, mostly because sleeping seems to mildly reset my performing ability. When I first started playing at retirement homes six years ago that was not the case, but in recent years I have had to push myself on the same day to sound better. It probably has to do with my increased experience, and how it takes more work for me to grow.

At Vista del Monte I played at their Pinegrove building for a small crowd of seven residents. I always have the same crowd there, and they are never disappointed with my repertoire. I added Brahms' Rhapsody 2, in addition to Liebestraum 3 and Un Sospiro. Next I am going to start performing Brahms' Ballade 1 again, since I do not have much trouble playing it at home. For that piece of music I have to focus on the second page before the chords at the bottom. Prior to the chords, the music requires you to keeps your arms as free as possible to be able to play the right and left hand with accurate dynamics. I have found if I am too loose though, I start missing notes during that section. It is bad mostly because of the forte needed, since you cannot flop your hands and arms around when you need to make a distinct statement. It is never acceptable to flop your hands and arms anytime in playing piano, even though you need to stay loose. Control is always important.

When I played at Alexander Gardens I was excited because I wanted to try playing Suggestion Diabolique for them. The reaction I got was humorous, since a lot of them left the room when I did. I think I am going to have a difficult time incorporating that piece in my repertoire due to how different it sounds from anything else I play. The intro is a little slow, and once you get going, it becomes perpetually erratic until the last page. A lot of it does not make sense to most listeners, so I will have to find a way to get my audience interested.

I went to Heritage House at 4pm today to play for the residents. Earlier in the day I practiced Chopin's 19th Nocturne, along with Doctor Gradus ad Parnassum and Brahms' Ballade 1. Unfortunately I did not perform the latter two. I am going to start performing Doctor Gradus ad Parnassum and Ballade 1 at Alexander Garden's first, since I have the least amount of anxiety playing there. Until then I will practice it every day so it stays fresh.

I played well at Heritage House, which is crucial for me because there are more people watching and paying attention at that home. I remember playing Clair de Lune more fluid than I usually do, a goal of mine since I started listening to more recordings of it. I noticed in other people's recordings of Clair de Lune, their melody is a lot more prominent and the phphrasing is more accurate. I strive to get my version of Clair de Lune to that level, and today was a step in the right direction. Other than that I performed Rachmaninoff's Prelude in C# minor. I played that well also, which I attribute to practicing the triplets earlier in the day. 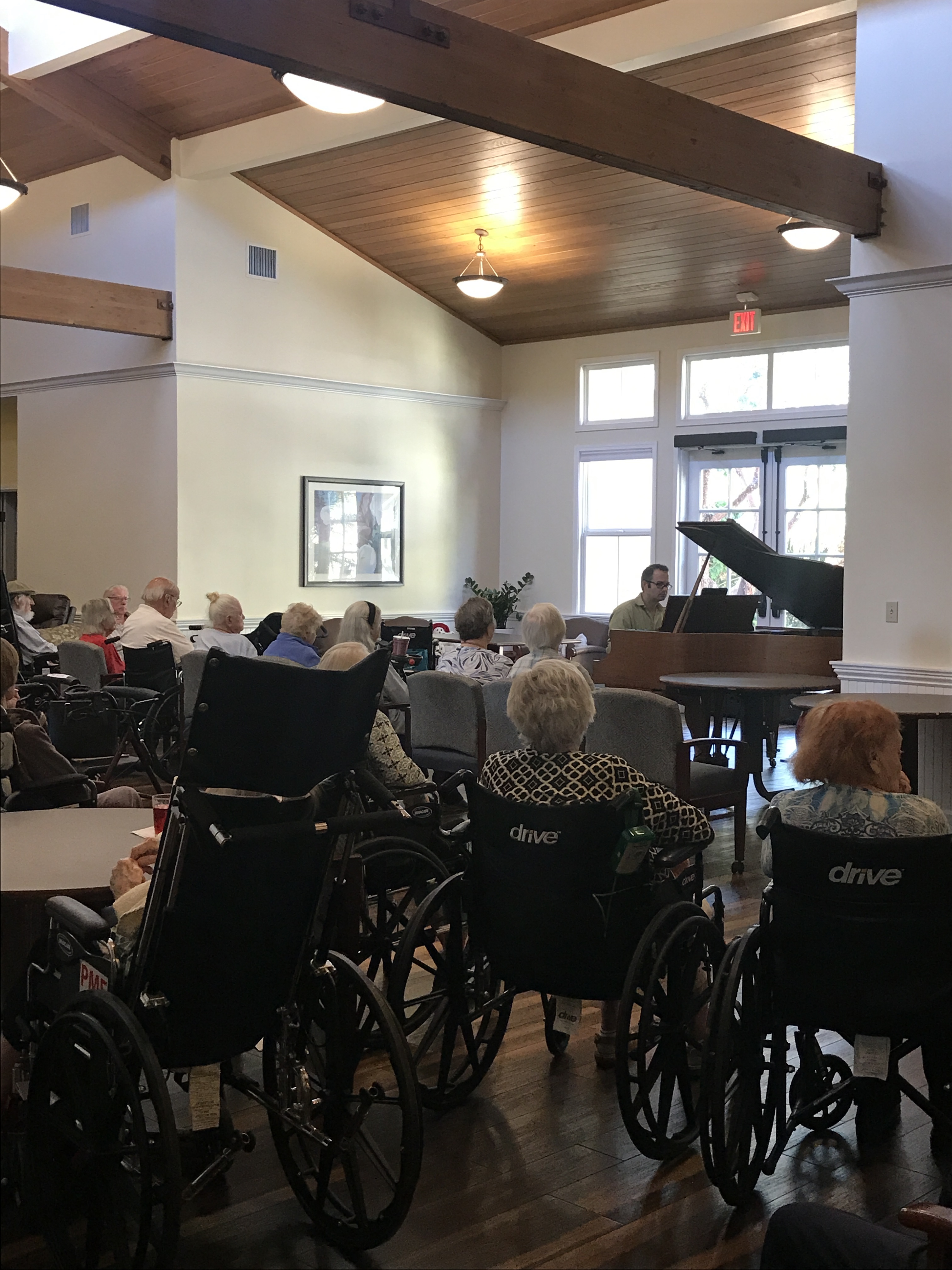 This Saturday was the third Saturday of the month, which means I went to Villa Riviera to play for the residents. I was happy to play here today because I had three new pieces I wanted to perform. The first new piece I played for everybody was Doctor Gradus ad Parnassum by Claude Debussy, which came back to me quickly even though I had not played it for others in quite a while. It is a piece that sounds like a technical exercise, and in that way it is like an impressive parlor trick. I get many positive receptions after playing Doctor Gradus, and today was no different. My fingers flew over the keys without much problem, and I did not stumble over any sections except for the slower section in the middle of the third page. I am not sure why I stumbled there since it does not require any dexterity to play well. I think it was because it was such a change from the other sections that are nimble.

I also played Brahms' Rhapsody 2, the second time this week at a retirement home. I still am getting used to having it in my repertoire, but it's newness is not obvious since currently I am able to play it without stuttering. I was much prouder of myself for being able to play it due to it's difficulty, at least compared to Doctor Gradus ad Parsassum. Each piece has it's own difficult sections, however the piece by Brahm's took me much longer to learn. I think it's because the Rhapsody has more of a mature, emotional component versus the etude style of Doctor Gradus.

After I was finished with these two pieces I continued with my usual repertoire of Beethoven and Chopin, however I am looking forward to playing Brahms' Ballade 1 next week for all the homes I am going to.

I went to the Californian at 5:30 today to play for the residents. I was determined to play most of my new pieces, and after I did I realized I have a lot more work to do. I tried playing through a sonata by Haydn, but I got stuck at many places. I ended up having to improvise a large portion of the middle and end, but people still clapped when I was finished. Perhaps they were being polite, even if I did not have the easiest time getting through it. I also played Liebestraum 3, which also did not sound the best. I know why I did not play it well though. It was because I was trying to play at a low volume at a slower speed, but that is not how I usually play it. I also tried playing Un Sospiro, but also had to leave out a large portion of it because I got stuck. At least now I have memories of which parts I need to specifically practice. I ended my time at the Californian with Mozart's K545, which I played well. Something funny happened there, which was a resident gave me her sandwich dinner while I was playing. It was a nice gesture and I look forward to enjoying it for lunch tomorrow.